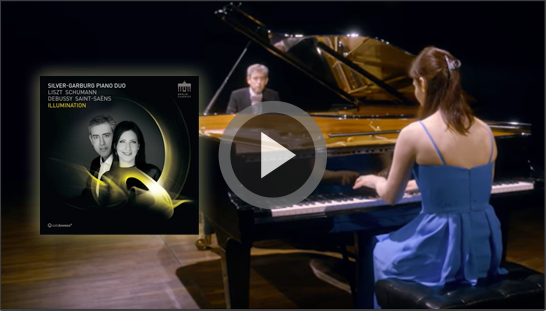 Let there be light! The Silver Garburg Piano Duo compels with their superb sound and outstanding ensemble playing, as well as their imaginative rubati and agogic. Extremely classy.

Concerti, CD of the Week

The Schumann is played beautifully and is actually better than the very good Argerich and Barenboim recording. The whole package is truly, as titled, an ‘Illumination’ of works.

A veritable aha effect… illuminates the complexity of this masterpiece in a way that has never been heard before. In the congenial interpretation of the Silver-Garburg piano duo this also shines right through.

The publication comes close to an enlightening revelation. Masterful arrangements of three different masterpieces, interpreted on an adequate level.

With this record, the two have ultimately established themselves at the top of the international piano duo scene.